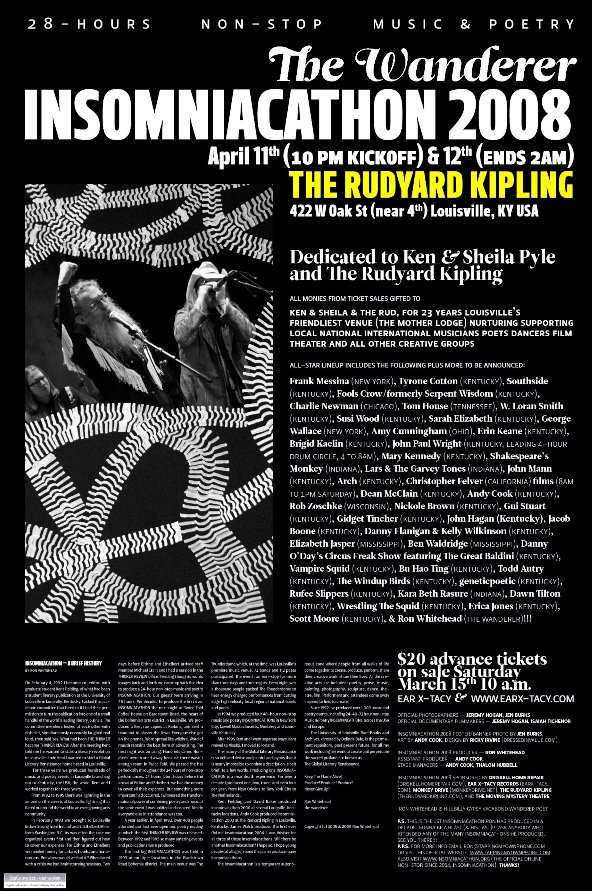 I thank you Ron Whitehead! You fucking rock! and it rocked! It will be etched in my mind and heart for as long as I live.  It was beautiful.  You made magic happen.  It enkindled so many emotions in me and brought back so many wonderful memories.  You gave hope to so many young people and you gave hope to me and Nathaniel and Rani's generations
with those first Insomniacathons, true hope, true fire, true passion, true compassion, true support, true understanding.  You did it once again this time.  You made this city burn with creativity and you rocked the fucking house with your new and best band ever, hands down.  It was magic.  It was the creative fire burning non stop. It was awesome.  I feel privileged that you invited me to read at it, truly privileged to be apart of it, cuz it was fucking
awesome, all the way.  I have been depressed ever since it ended.  I was awakened with it so much and it's hard to go back to normal life afterwards.  You are the only guy that I
have ever known that can bridge so many gaps and bring so many diverse people together, and that diversity creates the most incredible passionate energy.  There is nothing else
like it that I have ever experienced in my life, nothing else.  It is just awesome and it fosters such an affirming environment.  I love that guy Jake Boone, he had fucking soul, so much soul, and he was truly giving of himself up on that stage, and that takes some balls, but it also takes the kind of environment that you create with these insomniacathons.  You tell and teach everyone that they have poetry within them and that life is poetry and a poem, and it totally turns everything upside down and makes it real and beautiful.  I liked your talk of Love and the Bible, very eloquent, and hell, I wouldn't have been anywhere near that
stage if it wasn't for your support cuz I'm terrified of being up in front of people, even though the minister genes run deep in my long genetic history of loud mouths, ha.  I felt a sense of artistic community at that insomniacathon that I haven't felt in years and years.  It was a great environment for me to be able to experience again.  It brought me back my roots in so many ways and showed me that I'm not as isolated as I often feel.  It showed us all that there are others who are also tuned in and being themselves and not conforming, and that is so easy to forget in this society and Homeland Security Age that we live in.  Naw, it was an awesome experience for me and I thank you for it. I can't stop thinking about it.  I am plagued with so much emotion regarding it, what a legacy you have.  I can still remember your first Insomniacathon at Twice Told Coffeehouse so many years ago, what a legacy you have.  There is just nothing like it on this earth.  You should publish a whole book called Insomniacathon some day, a whole book just about the Insomniacathons, and it would definitely be good and not like anything anyone had ever read or written, a true original piece of artistic cultural history.
Take Care Ron.  You made magic happen and the creative fire breathing dragon was alive again at the Insomniacathon.  You made it happen.
Someday when it's not so close and painful you're going to have to write a story about you and Sarah as a healing process and it's gonna be some of the best shit you've ever written.  You're gonna make those words sing and drive it fucking home and it's gonna be powerful stuff.  You're gonna let all of it out onto the page and therefore purge yourself of it, and it's gonna feel good, and it's gonna be magic.  Yeah, those words are going to sing from the page.  You''ll get so loose you'll lose yourself in those words and just let go and let it all loose and a huge weight will be lifted from your heart and a great story will be written, etched out in time.  It may be the best story of your life and you're gonna write it some day.  I know it.  You're gonna put all of that pain and heartache into some of the greatest prose that you've ever written and into some of the greatest prose that any of us have ever read.  You're gonna get to that space where you can let it all come out and you're gonna do it and all of that pain you are suffering is going to make magic on the page.  You're going to just let that muse pour out of you and it's going to be awesome, and I can't wait to read it cuz it's going  to be some of the best shit I've ever read.
Take Care buddy.  I thank you for everything for all of these long
years and I send you my love.
Gui
Gui Stuart (Kentucky)

The Magician's Creed
You are the people,
You are this season's people –
There are no other people this season.
If you blow it, it's blown.
– Stephen Gaskin
I. The human race is in imminent danger of self-destructing and dragging our mother earth down with it.
II. There will be no miraculous salvation due to so-called Mayan 2012 prophecies; or Jesus' or the Mahdi's return; much less from the irresponsible governments, corporations, media, and academics who go us into this mess in the first place.
III. The theory of probable realities states that each individual person decides the fate of the entire universe.  If you truly choose to save the world, you will wind up in a probable reality in which the world is saved.
IV. The only chance for survival – not to mention prosperity – is for each individual to reject society's mutual suicide pact and make saving the earth and future generations their NUMBER 1 PRIORITY (as opposed to something they may get around to someday).  This is the magician's equivalent of the Bodhisattva' s oath.
V. Rejecting social conditioning means eradicating all trace of self-pity.  Only by clear, sober, objective thinking – as opposed to the endless loop of yada-yada nonsense emanating from society – can each individual save him/herself and the earth.
VI. This type of thinking is based upon what each person's heart tells them.  It is different for everybody; and everybody has to find their own answers for themselves by examining their own habitual thoughts, moods, and concerns minutely.  To do this magicians use various techniques, including:
a)      techniques of self-analysis such as Active Imagination and Recapitulation.
b)      techniques of transformation such as resorting to tree spirits and the earth.
c)      techniques of hopefulness such as Creative Visualization.
VII. Detaching from society's conditioning of self-pity necessarily implies taking complete responsibility for oneself rather than wallowing in helplessness or daydreaming.  To do this magicians:
a)  channel their own spirit guides themselves for information and advice;
b)      go to nature spirits for validation rather than seek the approval of other people or society;
c)      become as self-sufficient and frugal as possible, including growing at least some of their own food and reducing their needs to the bare minimum.
VIII. The goal of magic is to make everyday life more dreamlike; to be able to feel comfortable in situations beyond one's control.  Feeling relaxed and in good shape even in the midst of a maelstrom is called 'Enlightenment' .  Enlightenment doesn't mean light as opposed to dark; but rather light as opposed to heavy.